“Those who cannot remember the past are condemned to repeat it.” —George Santayana, (The Life of Reason, 1905)

For Dr. Mark Wilson, Director of the Caroline Marshall Draughon Center for the Arts & Humanities (aka Pebble Hill), it was seeing his vision for a travelling exhibit that commemorates Alabama’s participation in World War One realized. For industrial design Professor Shu-Wen Tzeng’s third-year Exhibiting and Packaging Design studio, it was an opportunity to learn about communicating through design. The end result of this collaboration is an immersive and interactive exhibit that will travel to various cities across Alabama next year in anticipation of the 100th anniversary of the United States’ participation in The Great War in 1917.

Seventeen industrial design students spend fall semester working towards the goal of introducing visitors to stories of Alabama’s involvement and impact in Work War One with an exhibit that communicates aesthetically and effectively; that is flexible enough to be used in different sites; that is light weight and easy to assemble and dissemble; and that can fit in a van for transport. They researched World War I, creating a visual identity for the project, and storyboarding the user experience of the exhibit. They visited Lewis Cooper Library in Opelika and the Museum of East Alabama to get an idea of the various venues that might host the exhibit. On November 30, they presented full-scale working prototypes to Dr. Wilson and the Pebble Hill staff.

Visitors to “Remembering the Great War: Alabama and World War I” enter the exhibit through a replica of the victory arch that was constructed in Montgomery to celebrate the soldiers’ return home. They encounter a series of vertical panels that are placed around a circular timeline of World War I. A display case of actual World War I artifacts sets in the center. The panels, which are lightweight and easy to assemble, give a history of Alabama’s participation in World War I from various perspectives. One three-sided panel profiles actual Alabamians: Cleveland Abbot, a Black soldier, Edward Wren, a white soldier, and Anna Mae Beddow, a nurse. As an interactive element, visitors make poppies for the memorial panel. The design concept linking the exhibit together is World War I’s trench warfare experience.

Though the exhibit is compact, it effectively communicates the impact of World War I, a global conflict so large and devastating that it was called The Great War.

“This past June, I introduced Professor Tzeng to several representatives of small communities in Alabama, and they loved the idea of a traveling exhibit that would tell the story of Alabama’s participation in World War One,” says Dr. Wilson. “The exhibit has exceeded all of our expectations, and we look forward to building a schedule that will take the exhibit from town to town beginning in April 2017. The exhibit is creative and informative, and it will appeal to viewers of all ages.” 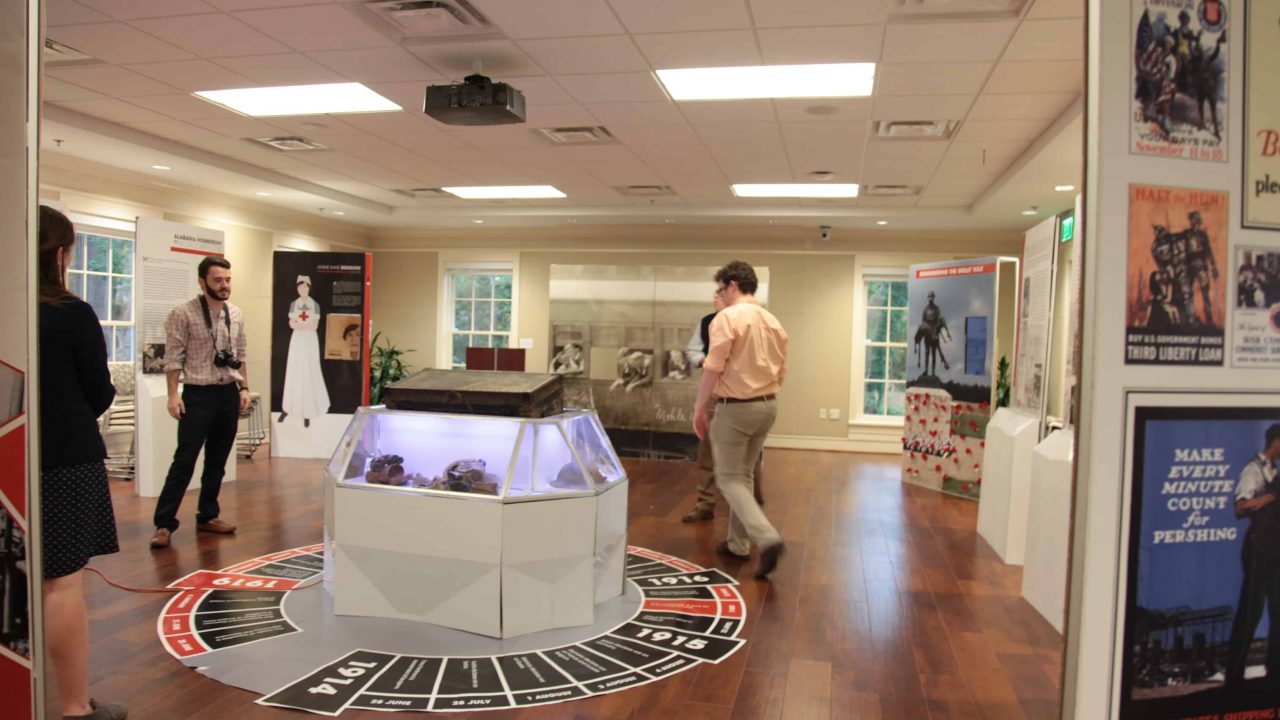