As of 2016, the number of veterans with service-connected disabilities was over 4 million, and of those, more than 1 million had significantly debilitating disabilities (US Census Bureau). This large population presents an urgent need for smart home control systems that allow veterans with disabilities to more easily perform daily home activities, including locking and unlocking doors, turning lights on and off, raising and lowering blinds and controlling home thermostats for heating and cooling. Through the Veterans Affairs (VA) Specially Adapted Housing Assistive Technology Grant program, an interdisciplinary research team based in the College of Architecture, Design & Construction (CADC) has produced a prototype and system solution designed to make such everyday home activities easier and faster for our nation’s veterans.

The team is comprised of faculty and graduate students from the School of Industrial and Graphic Design, working in collaboration with Auburn’s Center for Disability Research and Policy Studies (CDRPS) and industry partners with expertise in smart home technology. The goal of the project was the design of a prototype for a market-ready, affordable home environmental control system that would enable notable increases in independent living for veterans and service members with significant disabilities, including those with high tetraplegia (paralysis of all four limbs and the torso).

To develop the prototype and system solution, the team utilized cloud-based technology applications to design user interfaces for touch, voice and eye tracking. The resulting home automation system will allow people with a range of disabilities to easily control lights, climate, door openers, door locks, window shades and other home functions. The system can be accessed on both Apple’s iOS and Microsoft Windows operating systems using various input methods including touch, switch scanning (a system for assistive computer interaction), eye tracking and voice control through an Amazon Echo.

The design and development of the prototype and system solution involved several stages. During the first phase of the project, the Principal Investigator, Jerrod Windham (an industrial designer) worked with Wei Wang (a graphic designer) and graduate research assistants to develop the initial user interfaces. A key early step in this process was coming to a comprehensive understanding of the circumstances and needs of veterans with disabilities. Working closely with Christine Fleming from the CDRPS, the team developed “personas,” fictional representations of people with a variety of disabilities, detailing their daily activities and identifying their routine home tasks. They also produced blueprints of veterans’ homes to locate spaces in which these activities take place. The personas and blueprints were then used both to generate ideas and to evaluate the usability of the team’s design concepts. Concepts that were moved forward into the stage of prototype development had to successfully accommodate both the user and the technology.

After Auburn’s research team completed its work, final design concepts and rough prototypes were shared with the team’s industry partners, Smart Solutions and Ignition Digital, who developed the programming and designed the system’s “backend.” This aspect of the system, which the user never sees, allows for remote interaction with the system and is key to its success. In collaboration with hardware manufacturers and the medical industry, Smart Solutions is continuing to implement and disseminate the resulting designs. One additional goal is to develop telehealth components that gather and track health information remotely for those with communication and mobility challenges at home and in the hospital and incorporate them into the system.

This project has provided many opportunities for the growth of the CADC research enterprise and the scope of its nationally ranked academic programs. The evolution of mobile digital devices and the design and development of apps is an area in which industrial designers, graphic designers and industry partners can collaborate on projects to provide transformative, life-changing solutions that will enable veterans and a growing population of people with disabilities to live with dignity and increased independence. 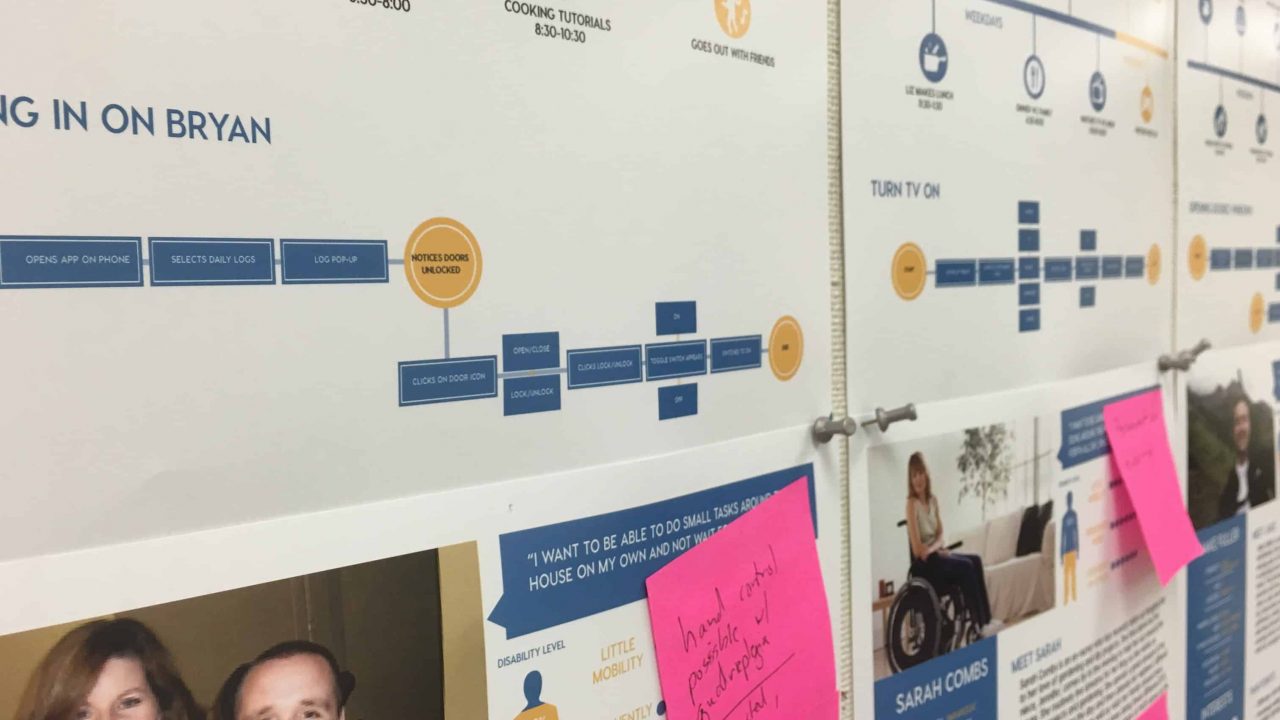