Skip to Navigation Skip to Content
Search The Newsoom

An esteemed group of nearly 50 military officers from approximately 50 countries attended presentations from Auburn University leaders and toured the campus on Wednesday morning as part of a collaboration between the university and Maxwell Air Force Base.

The group learned about the university thanks to a panel of speakers that included Provost Bill Hardgrave; Chief Operating Officer Lt. Gen. Ronald Burgess; College of Architecture, Design and Construction, or CADC, Dean Vini Nathan; and CADC professors Richard Burt and Eric Wetzel. The group consisted of officers in the International Officer School, or IOS, Field Studies program organized by Maxwell Air Force Base in Montgomery as part of a seven-week college preparatory course.

Wednesday marked the first time the IOS program incorporated Auburn into its itinerary, and the officers will go on to take a 10-month course known as Air War College, or AWC, after completing the seven-week prep course. The IOS—which has educated more than 11,000 international military students since 1954—is the lead-up course to prepare all international officers for attending AWC and operates to enable the educational mission of the schools and the programs it supports.

Speaking in a Mell Classroom Building lecture hall adjacent to Ralph Brown Draughon Library, Hardgrave gave the international officers an overview of Auburn’s history, including how it became a land grant institution, information about fundraising, the student body, research and the future of higher education in the United States. He answered several questions ranging from scholarships and tuition to the university’s international student population and was excited about the chance to educate the group about Auburn.

“It’s such a pleasure for us to welcome these international officers as part of the Air War College from Maxwell Air Force Base, and we are honored and privileged to be part of this program,” Hardgrave said. “This gives us the opportunity to speak about higher education in the U.S. and, in doing so, highlight Auburn University.

“We were very purposeful several years ago to increase our undergraduate and graduate international students and to have a campus increasingly reflective of the world. Events such as this are indicators of a global campus.”

Burgess—who rose to the rank of lieutenant general during a 38-year U.S. Army career—congratulated the group for being selected to participate in the IOS program, stressed the importance of building and cultivating relationships in the armed services and described his leadership role at the university.

“You wouldn’t be here if your country and your military didn’t think you had exhibited and demonstrated the potential to serve at a higher grade, so you’re here so you can learn more about us and we can learn more about you,” said Burgess, the former U.S. Defense Intelligence Agency director who attended the Air War College at Maxwell Air Force Base in 1995. “You will build lifelong relationships you will be able to use personally and professionally, and I urge you to take advantage of that. You can’t build that anywhere else, and that’s why this type of seminar and this education is so important.”

Nathan detailed CADC’s vast array of programs, disciplines and educational opportunities for students and talked about the college’s impact both domestically and abroad.

“A detailed look at the College of Architecture, Design and Construction provides clear examples of Auburn’s tripartite mission of teaching, research and service,” Nathan said. “Opportunities like these visits, where institutions share experiences, are the foundational blocks for promoting mission awareness and appreciation, as well as understanding and mutual cooperation.”

Burt, head of the McWhorter School of Building Science, outlined the school’s programs and projects, as well as described the faculty’s history of service to the public and local community.

Wetzel gave the group a quiz featuring Auburn trivia before they took the short walk to tour Jordan-Hare Stadium. From there, the group visited the Robins and Morton Construction Field Lab, where they interacted with various design and construction technology utilized by the college and even had the chance to meet “Mac,” the McWhorter School’s prized robotic dog that is involved in a multitude of field projects and research.

“This is a wonderful opportunity for us to demonstrate the significant and serious outreach efforts at Auburn University,” said Wetzel, who helped organize the group’s itinerary and hosted the IOS on behalf of Auburn. “Between this cohort and the one arriving in July, we will interact with more than 130 military officers from approximately 80 countries. These officers were selected by their countries to attend the program at Maxwell Air Force Base, and we get to share Auburn University with them and, in particular, the teaching, research and service taking place in CADC and the McWhorter School of Building Science.”

For the visitors and Maxwell Air Force Base organizers, their trip to the Plains was a chance to allow students to experience an American college atmosphere and learn about higher education and CADC’s programs while improving their communications skills and exposing them to new technologies they may not encounter in their home countries.

“We were really excited to meet with the team here at Auburn and have just been thrilled with the support we’ve received in getting our students the experience of touring the campus,” said Maj. Tamara Merritt, chief of International Programs at Maxwell Air Force Base. “This program traditionally has gone to Washington, D.C., or New York City, but with COVID, things changed, and a lot of opportunities presented themselves here in Alabama. Being able to listen to school leadership, understand what higher education looks like in the United States, hear about the opportunities that are provided to citizens and see a little bit of college life and even tour the stadium was great for them.

“It’s been a fantastic opportunity, and I know the students enjoyed it.”

Wednesday’s visit was the first of two such collaborations scheduled between Auburn and Maxwell Air Force Base, with an even larger group of IOS Field Studies students coming to campus on July 14. 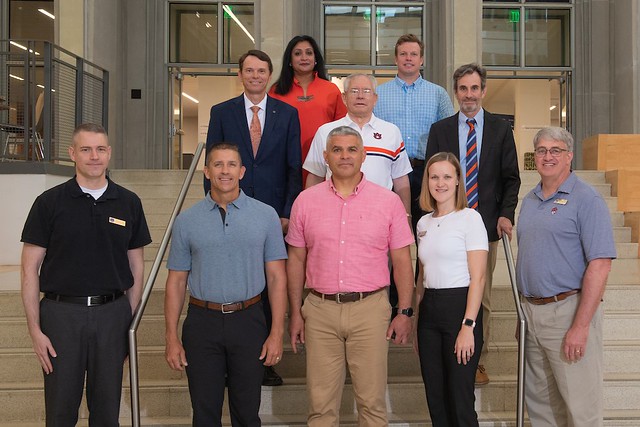 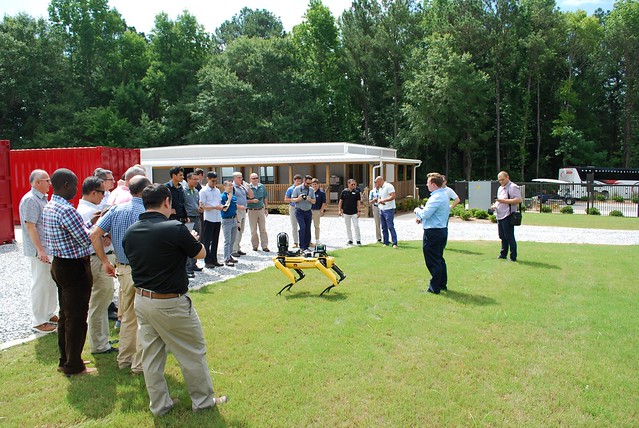 College of Architecture, Design and Construction Assistant Professor Eric Wetzel introduced a group of nearly 50 Maxwell Air Force Base International Officer School students from approximately 50 countries to the college's prized robot dog, "Mac," during their tour of the university on Wednesday, June 23. 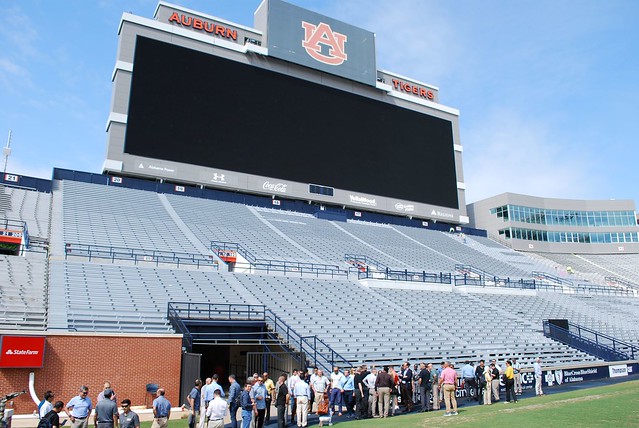 A group of nearly 50 Maxwell Air Force Base International Officer School students from approximately 50 countries visited Jordan-Hare Stadium during their tour of the university on Wednesday, June 23.

Auburn University Chief Operating Officer Lt. Gen. Ronald Burgess congratulated a group of nearly 50 Maxwell Air Force Base International Officer School students from approximately 50 countries and urged them to make the most out of their opportunities to build relationships during their tour of the university on Wednesday, June 23. 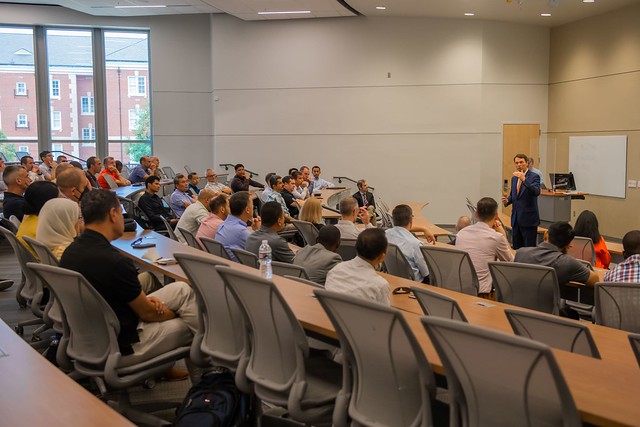 Auburn Provost Bill Hardgrave spoke to a group of nearly 50 Maxwell Air Force Base International Officer School students from approximately 50 countries during their tour of the university on Wednesday, June 23. 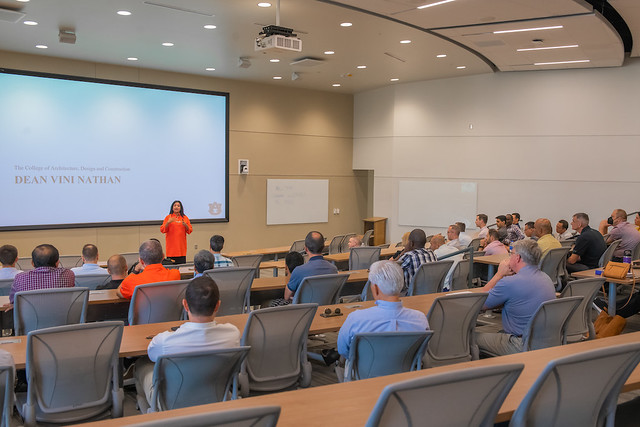 College of Architecture, Design and Construction Dean Vini Nathan gave a presentation about the college's programs and initiatives to a group of nearly 50 Maxwell Air Force Base International Officer School students from approximately 50 countries during their tour of the university on Wednesday, June 23. 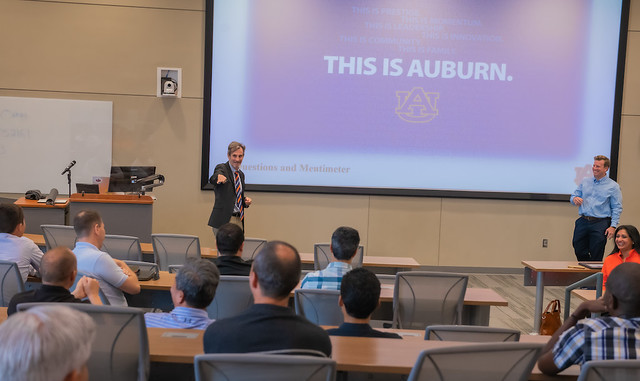 Richard Burt, head of the McWhorter School of Building Science in the College of Architecture, Design and Construction, detailed the school's endeavors while speaking to a group of nearly 50 Maxwell Air Force Base International Officer School students from approximately 50 countries during their tour of the university on Wednesday, June 23.